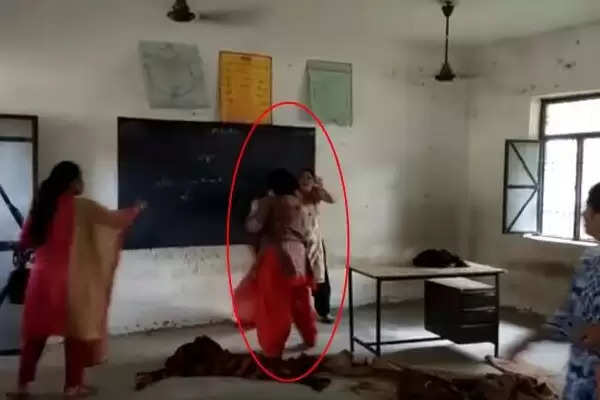 Employment News-In the past, the case of eight girl students being taken out of the room in a school in the night had not cooled down, that on Wednesday, two teachers clashed with each other in the primary school of Kachla. It is alleged that one called his family and got the other beaten up. Block Education Officer (BEO) Shashank Shukla also reached the spot and informed the teachers about the incident.

The matter is about nine o'clock in the morning. In a primary school in Kachla, the teachers arrived as usual. During this, there was an altercation between the two teachers over some issue. Which later took the form of a fight. One teacher alleges that the other called her family members and relatives. who beat him up. The same teacher called BEO Shashank Shukla and informed about the whole matter.

After this, the BEO, who reached the spot, inquired about the incident from both the teachers and the children. Here in this case, the victim teacher has also given a complaint to the Kachla police. Inspector in-charge Ajay Singh Chahar says that the matter has come to the notice. The BEO himself went to the spot.
-
On getting information about the fight between two teachers in Kachla's school, he went to the spot. Information has been obtained from both sides. The officers have also been informed. Such a case cannot be tolerated. A teacher has complained.
Shashank Shukla, Block Education Officer