Demonstration with bands in Panchkula, teachers will reach from across the state on November 24 and 25 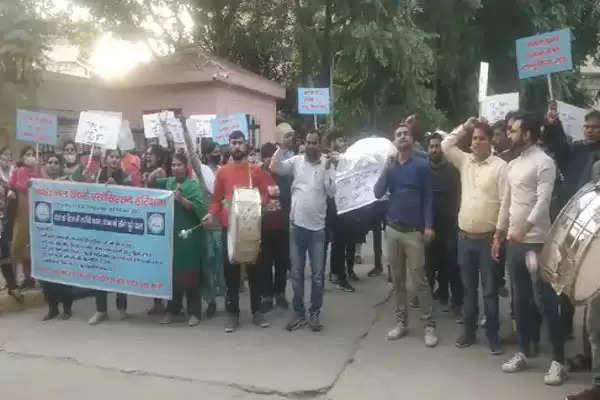 Employment News-The performance of vocational teachers from across the state of Haryana continued outside the education house in Panchkula on Thursday. Teachers took out the funeral procession of Shiksha Sadan with drums. There was a vigorous protest at the gate for two hours. The teachers' movement entered the 24th day under the banner of Haryana Vocational Teachers Association. On Thursday, the movement was presided over by Sonipat district head Naveen Singh and woman head Garima and Mahendragarh district head Satbir Singh and woman head Kamlesh. During this, the teachers demonstrated with slogans outside the gate of the education house for about two hours. The funeral procession of Shiksha Sadan was taken out and the band was played.

Department has no concrete answer
State President of the Association, Anoop Dhillon, said that on November 17, it has been 24 days since the movement of Vocational Teachers. Till date the government has not been able to give any concrete answer and neither has the department been able to give it. The anger among the teachers is increasing. The dead conscience of the education house was taken out on a funeral pyre and raised slogans in front of the education house for 2 hours.
Since October 25, the movement is going on for three demands.
First of all, the demand was merged in the education department.
- Equal work Equal pay
Job security for 58 years by applying service rule
State level performance on 24th and 25th November
Every day teachers from two districts of the state come to Panchkula and perform in front of the education house. On November 18, it is the turn of Jind and Kaithal districts. Intensifying the movement, all vocational teachers of the state will protest on November 24 and 25.