Teachers protested against the new education policy 2021, teachers demonstrated outside the mini secretariat 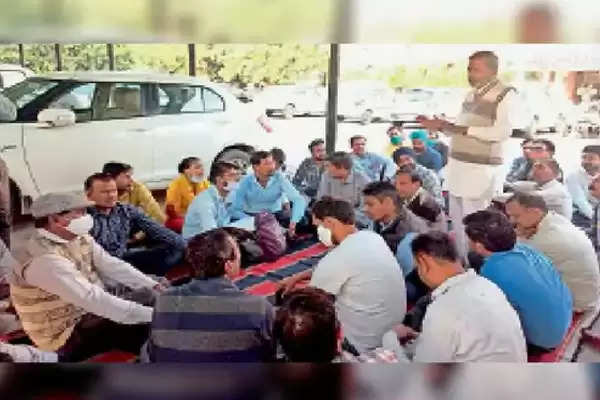 District head Virendra Singh said that under the new education policy of the Central Government, the first and second classes are going to be handed over to the Anganwadi. He said that the work of Anganwadi workers is to take care of the nutrition of the children, but the government wants to take the job of teachers from them.

He said that due to this, the posts of teachers would end. He said that by doing this an attempt is being made to destroy the structure of public education, which will not be tolerated. Along with this, the persistent attitude of the government regarding the restoration of old pension continues.

Virendra Singh said that the government is adopting the policy of evasiveness on transfers of teachers for the last several months. After the demand of the organization for a long time, after the lapse of more than half the session, now the schedule has been issued regarding the transfer of primary teachers. In this too, there is a plan to eliminate many posts on the pretext of online rationalization. The policy of divide is being adopted by excluding guest teachers from it. LTC for the year 2016-19 is pending.

In many districts, cases of ACP and medical reimbursement are pending due to vacant posts of SO. The education system in schools is getting worse day by day due to wrong policies of the department. In the name of online education, the government has made the education department a laboratory.