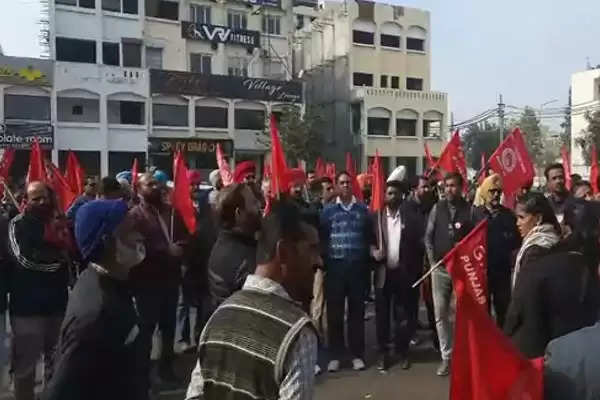 Employment News-In Jalandhar, Punjab, teachers, non-teaching staff from across the state together took out a flag march near the house of Education Minister Pargat Singh and conducted a poll-khol campaign. Teachers and raw non-teaching employees jointly distributed pamphlets among the people while taking out a rage rally from Mithapur to Cantt area under the banner of the jointly formed Sanjha Morcha. In these pamphlets, the anti-employee policies of the government and the promises made to the employees have been disclosed.

Before coming to power, the Congress party had promised that everyone would be confirmed in the very first cabinet meeting, but even after five and a half years, the employees have not been confirmed. Cursing Pargat Singh, he said that he is the first education minister who has no idea about the education department. They have no idea what is going on in the department. The officers don't even listen to him.

Pay scale should be one, government should implement old pension scheme

The leaders of the Sanjha Morcha said that very few employees will be regularized in the new regularization policy for the employees that the government has recently made. He said that as per the new policy, the same employee will be regular who is working in the projects of Punjab Government. Whereas in the state very little or nothing can be said of the government that there are very few projects going on. All the projects in the state from Sarva Shiksha Abhiyan to Mid Day Meal are sponsored by the Central Government.

He said that of course the projects belong to the central government, but the recruitment was done only by the Punjab government and its department. Then how did he become a central government employee. The employees who are becoming regular are being kept on basic pay for three years. They are being contract signed which is sheer blackmailing. Staff leaders say that according to the new policy of the government, the regular employee should be working in the department for at least ten years.