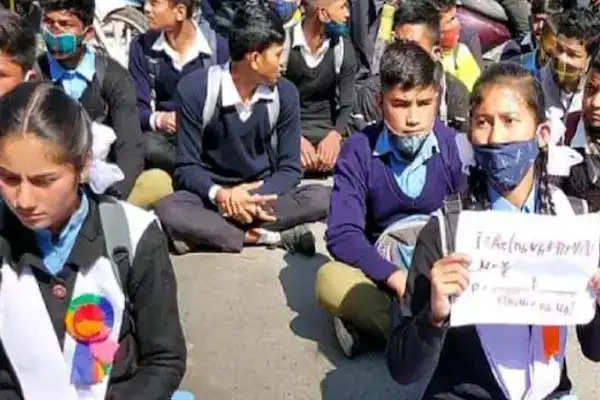 Employment News-The Education Department of Uttarakhand has come into the limelight due to the difficulties faced by itself and the students. The big news is that this year the number of students who have passed class 12th board examinations with good marks or percentage is very high, so there is a crisis regarding their admission in government colleges. On the other hand, the schools and colleges of the mountain are accusing the state government of favoritism and injustice regarding their problems. Here students from primary school to college are reaching the district headquarters and protesting on the streets, while somewhere they are burning effigies of the Higher Education Minister. Overall, in the last ten days, the pole of the poor education system has been exposed.

Students protesting leaving studies
According to the report of News18's Bageshwar correspondent Sushmita Thapa, a week ago, the students of Government Inter College, Ratirketi, a remote area of ​​Bageshwar, are facing the problem of lack of teachers for a long time. These students, who reached the district headquarters demanding the posting of teachers, demonstrated on the streets. Here, angry parents protested at the school gate demanding the deployment of teachers at the school gate. The same situation is also with the higher education system of the district. In colleges only the principal is absent. The students of Bageshwar Mahavidyalaya have been sitting on dharna for several days, leaving their studies and writing.

Higher education minister's effigy burnt
The students allege that in the last two years, the principal has come to the college only a few days. Due to the principal being on leave every day, the students are not able to do even small tasks. Students have also sent a memorandum to the Minister of Higher Education in this regard, but no hearing has been held so far. The troubled students burnt the effigy of the Higher Education Minister and the principal and said that till the principal does not come to the college, the dharna will continue. On the other hand, a new crisis has arisen in front of the state regarding higher education.

Will there be evening classes in colleges?
This year, due to the passing of more students with good marks, there are problems regarding admission in government colleges. According to a TII news, Higher Education Minister Dhan Singh Rawat instructed that the seats in government institutions should be increased. Rawat has also suggested the option of absorbing more students in colleges through the option of evening classes. How more number of students will be absorbed in colleges, it can be decided in the coming days.

After all, how did the shortfall of seats happen?
Talking about the Uttarakhand Board exam, last year more than 80 percent students passed in class 12th, whereas this year 99.56 percent passed. In fact, due to the outbreak of Kovid, a guideline was issued that the results of the students would be prepared on the basis of internal assessment instead of examinations. Due to this, more students are ready to take higher education this time and the limited number of seats in colleges has made it difficult.