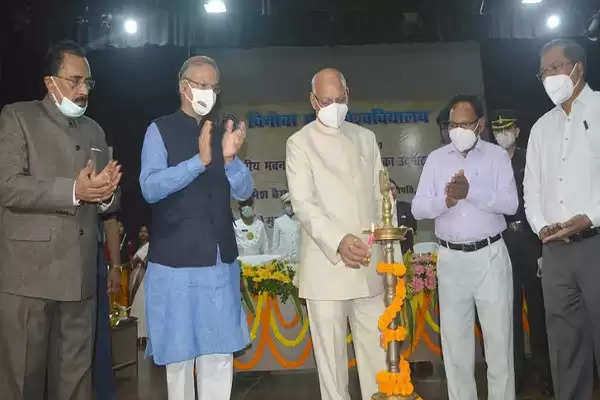 Employment News-Governor Ramesh Bais, who reached Hazaribagh in Jharkhand, said that since I have come to Jharkhand, I have seen immense possibilities of development here. Wherever I have been, I have worked for health and education. If development work is done in both the areas, then the development of the state cannot be stopped. There is a shortage of teachers in the universities of Jharkhand. If teachers are not available, how will there be quality improvement in education. For this, efforts are being made to overcome the shortage of teachers. The above things were said by the Governor cum Chancellor of Jharkhand, Ramesh Bais on Wednesday as the chief guest in the inaugural function organized in Vinoba Bhave University campus.

Governor Ramesh Bais had reached Hazaribagh on the inauguration of the newly constructed multi-purpose building and digital studio of Vinova Bhave University. Addressing the program at Vivekananda Auditorium, he said that whatever can be done in the development of Jharkhand, he will seek cooperation from the state government and the central government and will develop. I am in Jharkhand, Jharkhand is my home.

Governor Shri Bais said that teachers have an important role in the development of any society and nation. Teachers should establish exemplary behavior in the society. They have to be dedicated to education. Students have a lot of skill and talent. Teachers should do the work of making them aware of their responsibilities. Education brings awareness to the right people. The discrepancies go away.

He said that there has been a crisis on education during the Corona period. But online education emerged as an option for this. Vinoba Bhave University's digital studio will give opportunities to the students. Its benefits will be available globally through YouTube. By having indoor games and physiotherapy, the nearby victims will get the benefit of service. Cultural and moral values ​​will also be preserved by the synergy of science and art.

There should be research on climate change in Vibhavi: Jayant Sinha
Hazaribagh MP Jayant Sinha said that Hazaribagh is known for its natural beauty. Now it is being recognized from the field of coal and education. Climate change is a big challenge in the present time. There should be research on climate change in the department. He said that there is a shortage of teachers in medical and engineering in our area. In this regard, cooperation was sought from the Governor. Vibhavi is the top university of Jharkhand, I am committed to endow it with resources. With the presence of a digital studio, students from far-flung villages will also be able to connect with it. Referring to the Center for Tribal Studies being built in the university, he said that tribal art and culture would be preserved here. Which will prove to be a milestone for the entire region.

Tribal study will start in Tribal Study Center: Vice Chancellor
While giving the welcome address, Vice Chancellor Prof Mukund Narayan Dev informed about the development works to be done in relation to Vibhavi. He put before the Governor the problem of non-creation of posts in the PG department and fixation of teachers' salaries since the inception of Vibhavi. He gave information about the Center for Tribal Studies at a cost of 13 crores. Said that the study of tribal language would start with the formation of this. The stage was conducted by Dr. Joni Rufina Tirkey and the vote of thanks by the Vice-Chancellor, Prof. Ajit Kumar Sinha.