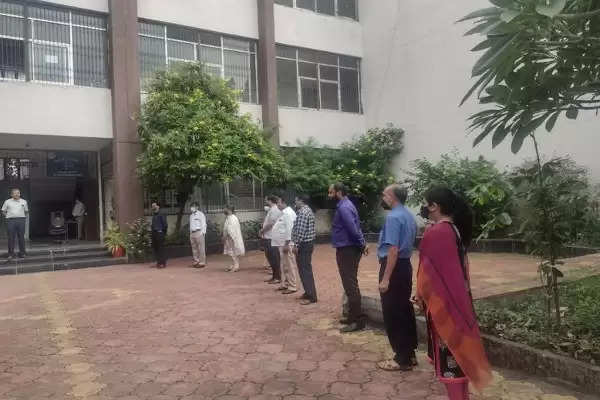 Employment News-Nationalism is the thread that binds people together in the thread of unity irrespective of their belonging to different cultural, ethnic backgrounds. It plays an important role in uniting all Indians from Kashmir to Kanyakumari. The development of the spirit of nationalism i.e. devotion to the nation is necessary for the solidarity of the citizens of any country. This is the reason why the national anthem is regularly practiced in schools since childhood and nowadays the national anthem is played in cinema halls before the film starts, in this episode the Department of Civil, Institute of Technology, Rajiv Gandhi University of Technology (RGPV). National Anthem and National Song will be organized every Friday in Engineering at 10:30 am. The program was inaugurated in the courtyard of the Civil Department. Senior officers, teachers and employees of RGPV participated in the program. At the end of this program, freedom fighters and their sacrifices were also discussed and how to keep all these free fighters connected in the national anthem and national anthem. was also told about

Along with this, the history of national anthem and national anthem were also discussed. Many songs are written, remembered, and forgotten in every nation. There are few songs which leave their indelible mark on the life of the nation. There are few songs which become immortal forever and make the history of a nation. Vande Mataram song is one of those songs, which instilled in millions of Indians a feeling of loss towards their motherland before independence. This is the song, singing which thousands of country-lovers laid down their lives on the mother-land. This is the song that brought life to the dead masses of the nation. Today, after 72 years of independence, even though the blood of our arms does not get hot by listening or singing this song, but before independence, when this song was sung, the blood flow of the youth of the country increased. The desire to die for the country became stronger. Even today this song remains a source of inspiration for us.

Dr. Suresh Singh Kushwaha, Head of the Department of Civil Department said that for the national integration of officers, employees, teachers and students, this program will be organized every Friday at 10:30 in the courtyard of the Civil Department and he urged all the members of RGPV to do this program. appealed to join.