President said - leaving the practice of rote learning in education, research will have to be adopted 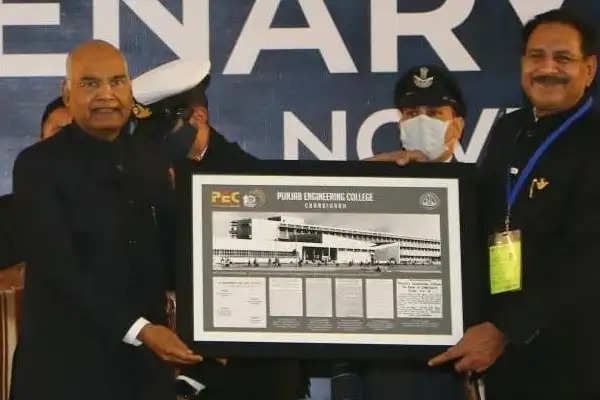 Employment News- Today we are in an era when rote learning has to be put aside and the idea of ​​research in education has to be promoted. Our new National Education Policy is a guide for all of us, as it encourages research and development. Under this policy, education will increase the power to think and solve problems. President Ram Nath Kovind said this while addressing the students, teachers and others in PEC.

The President said this policy will lead to learning more about how to be creative and multidisciplinary and how to adapt and absorb new material in ever-changing fields of study. The curriculum will cover basic arts, humanities, sports and languages ​​and will be based on our culture and values.

In his address, President Ram Nath Kovind said that it is a proud moment for him to attend the centenary celebrations of PEC. It is also an honor for all of us to know that PEC has always stood for the needs of the nation. In the early 1960s, when it was realized that our country needed the services of aeronautical engineers, the Indian Air Force approached Peck.

The urgent need was met by transferring students from other disciplines of engineering to the final year of specialization in aeronautical engineering in no time. The faculty of this subject was from the Indian Institute of Science. Incidentally the director at that time was none other than Professor Satish Dhawan, himself a distinguished alumnus of the college. Through this joint effort with IISc, Peck created history by becoming the first engineering college to deliver the first batch of 17 undergraduate aeronautical engineers to India in 1964.

Scientist Satish Dhawan's achievements can never be forgotten
The President said that I am happy to know that the alumni of this institute have brought immense fame to our country. He named Professor Satish Dhawan, an extraordinary scientist. Said he led India's space program through rapid growth and stupendous achievements. He is considered by the Indian scientific community as the father of experimental fluid dynamics research. My respected Dr. APJ Abdul Kalam regarded him not only as a guru but also one of the three teachers of his life whom he held in the highest esteem. Such people are not only good professionals but also great organization builders.

Kalpana Chawla remains an inspiration to millions
The President said, Dr. Kalpana Chawla, the first woman of Indian origin to travel in space, is a role model for millions of people across the world. I am glad to learn that PEC has established Kalpana Chawla Chair of Geospatial Technology. Peck is also known for its continuous collaboration with other prestigious institutions like IIT, PGI and ISRO. Such steps are helpful in realizing the goal of excellence in application-oriented research. He informed that an endowment fund was started at Rashtrapati Bhavan. Two years ago he got the opportunity to launch the Endowment Fund of IIT Delhi. Through this initiative the alumni can donate for the betterment of their institution as well as help the needy students.

Peck is spreading light all over the world
At the beginning of the function, the Administrator of Chandigarh and Governor of Punjab, Banwarilal Purohit delivered the welcome address. "Peck's alumni are spreading light around the world," he said. He also sheds light on the history of Peck. Said that PEC is progressing because of its staff, faculty, students. Haryana Governor Bandaru Dattatreya was also welcomed in the program. Peck Director Prof. Baldev Setia welcomed everyone. Throw light on Peck's journey. Dharampal, Advisor to the Administrator of Chandigarh, Dr. Rajendra Gupta, Chairman, Board of Governors of PEC were also on the dais. During this, the students celebrated by presenting a colorful programme. Peck's booklet was also released.

The President did not reach the stage and the announcement of the welcome was made
At around 5.45 pm, Chandigarh Administrator Banwarilal Purohit, Haryana Governor Bandaru Dattatreya, etc. first reached the stage, then the lady operating it mistakenly said that the President has reached among us, he is welcome. When it came to know that the President is not the administrator of the UT, then the operator accepted the mistake. During this the people present in the pandal laughed. The President reached the stage at least three minutes after the announcement of the welcome made by the female operator.