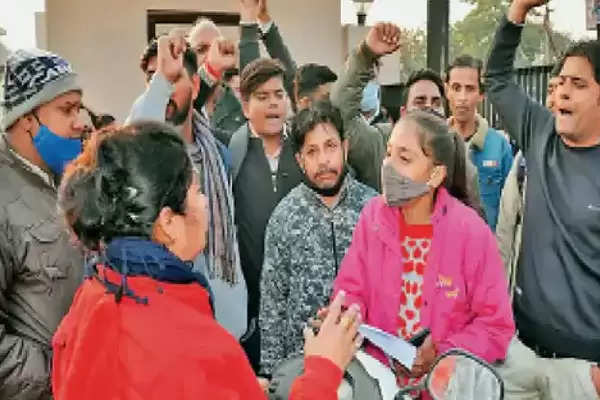 Employment News-Under Rule 134-A, the parents, who were wandering for admission of children in private schools for 15 days, sat on a dharna by closing the main gate of the District Education House at 3:30 pm on Thursday. The DEO, DEO and Block-One BEO and staff got trapped inside the office itself. Elderly women and many people who came here from work were also trapped for hours, there was also a discussion with the parents about going out.

City police station SHO Ramkumar and police chowki number-5 reached Sultan Singh. When the gate did not open till late in the evening, the staff members pulled out the women workers by climbing the wall. The parents gathered on the dharna itself, ordered jalebis and tea. DEEO Anoop Jakhar met the parents at 5:30 pm, but the parents remained adamant on the written assurance. At 9 o'clock in the night, DEO Suresh Kumar assured to get the children admitted by Friday and asked to hold a meeting with private schools, then the staff was raided at 9 pm.

The officials kept assuring them to get admission, the parents were adamant on taking it in writing. Guardian Dinesh said that his niece scored 88 per cent in the examination. She says that now after taking how many marks, admission will be done. Neeraj said that the school people say that unless the government gives their money, they will not give admission. Neeru said that her son is in 7th and daughter is in 9th. He has taken TC from school. Been waiting for admission since 15 days.

Now the name has to be known for the 10th registration of the daughter. The education of the girl child has also stopped online. Private schools are citing having a case in the High Court. Every time the education officers send the talk of early admission. Parents sitting on dharna inside the building at 7:30 pm. At 7:30 pm, the parents sat on a dharna inside the building of the house and started raising slogans. On the call of the officials, 7 parents went for the meeting at 7:30.

Parents should ask the DEO, DEO to give them in writing about getting their admission and go 10 schools who are not enrolling, talk to their principal on phone now. The DEO said that if the schools are not giving admission, we will see them for action. Every eligible child will be admitted. Schools will also be given notices.

The DEEO showed the file to the parents that the government had sent reimbursement money to private schools, but the parents stuck to their point of view and came out at 8 pm. At 8:30, there was an argument between the parents and the office staff about going out. At 9 o'clock, the DEO assured in writing that the children would be admitted on Friday. After this the office staff was allowed out.
Reimbursement money received by the schools of these blocks
block school money

One 40 34.8 Lakh
To 26 18.25 Lakh
Brada 5 1.32 lakh
Saha 3 78 thousand
Shahzadpur 11 3.27 lakh
Narayangarh 14 6.80 lakh
A total of 64.44 lakh school operators are not bothering the parents by the government: Haryana Progressive School Conference's state spokesperson and Integrated Private School Welfare Society president Saurabh Kapoor said that the government is troubling the parents, not the school, regarding admission. A meeting was held with the Cantt SDM on Thursday and a copy of the orders given by the High Court has been handed over on behalf of HPSC. Unless the government gives reimbursement as per RTE, admission will not be given. Kapoor said that in many districts, the education department is creating pressure by sending teachers or other officers of government schools to schools. Preparation is being made to file a case of contempt in the High Court by making a list of such teachers and officers, making them individual parties.