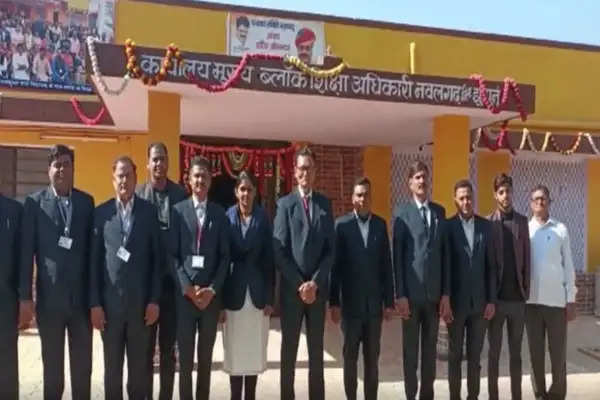 Employment News-When children come to school in dress, why can't the employees and teachers of the Education Department come wearing clothes?

With this thought, Ashok Sharma, the CBEO of the Education Department in Nawalgarh, Jhunjhunu, took a unique initiative in the new year and implemented the dress code in the CBEO office. Now the entire staff is seen in uniform colored coat-pants. Now a different view is being seen in the office.

All the staff, including the CBEO, are seen wearing uniform colored coat-pants. Earlier, the CBEO has got the office painted with golden color inspired by the Golden City campaign. After this, innovation has been done by implementing the dress code from the new year.

ACBEO Jaisingh Kulhari and Mahendra Saini said that they are very happy with the implementation of the new dress. If influenced by our office, the school staff implements the dress code, then they will be very happy.

Now preparing to implement dress code for school staff
CBEO Ashok Sharma said that innovation has been done first in the office. Very happy on the first day that all the employees of CBEO office are seen in same color dress. Now it is desired that the staff of government schools should also come under the dress code. When children come to school in a uniform color dress. If the school staff also comes in the same color dress, then the discipline of the school will improve and the children will also be more disciplined. He appeals to the institution heads of all government schools to implement the dress code for the staff in their respective schools.

Beautification of office done by spending 80 thousand rupees
First of all, beautification of the CBEO office was done by spending 80 thousand rupees. Golden color was done under the Golden City campaign of the office premises. This amount was collected by all the employees among themselves, the cooperation of Bhamashahs is also being taken to give a new look to the campus. CCTV cameras have also been installed in the office with the help of Bhamashah.