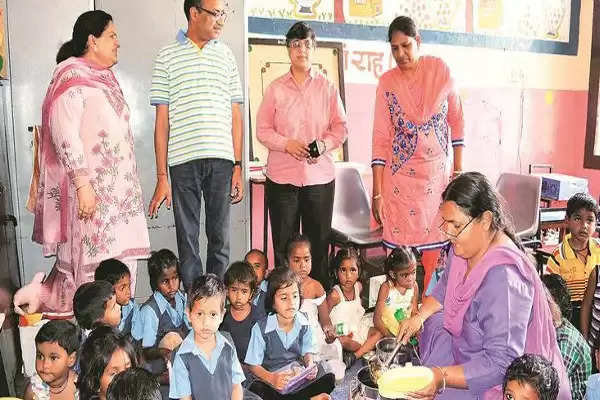 Health, education and nutrition are the main criteria on which NITI Aayog has selected the most backward districts in the country. Anganwadi centers have an important role in all three. Nutrition is monitored in pregnant and lactating women through the centres, while there is a provision to provide nutrition and pre-school education to children below the age of six years. For this, centers have been constructed in 429 gram panchayats of the district. Two to three mini centers are also operating in many villages.

Somewhere the building is not the address of the workers.
Basdih. The Anganwadi center built about two years ago in Pidhara village of Basandih block is dilapidated. Alam is that neither workers nor registered children come here. The center is being operated on paper. Apart from this, the situation of Anganwadi center to be built in Deorar is more critical. There is a building for the operation of the center here, but neither the workers come to the center nor the whereabouts of the children are known. Please tell that the total number of Anganwadi workers, assistants, and mini Anganwadi workers under the block is 171. Whose responsibility is responsible for the nutrition of children from seven months to three years and pregnant women, as well as the responsibility and nutrition of elementary education of children of three to six years. Whereas the number of children in the Anganwadi centers is 6881 children from six months to three years, and the number of children from three years to six years is 4837, the number of pregnant women is 2834.
136 centers do not have their own hall Haldi.

There are total 154 Anganwadi Centers in the development block Belhari, out of which 35 are Mini Anganwadi Centers. There are only 18 centers out of 154 which have their own building. The remaining 136 centers are set up in primary schools. In the block 0 to three years children 11015, three to six years old children 8831, lactating and pregnant women 3272, 11 to 14 years illiterate teenagers 462, malnourished children 1474, and highly malnourished children 401.
A look at Anganwadi centers
Total Anganwadi Centers - 3471
Total Anganwadi workers - 3060
Centers without buildings - 2671
Building Centers - 800
Vacant post of Anganwadi workers - 411
Mandate has been received to develop Anganwadi centers on the lines of pre-primary schools. In this regard, in coordination with the Basic Education Department, further strategy is being prepared. So that necessary structure can be developed for this.
Kushna Murari Pandey, DPO, Ballia.