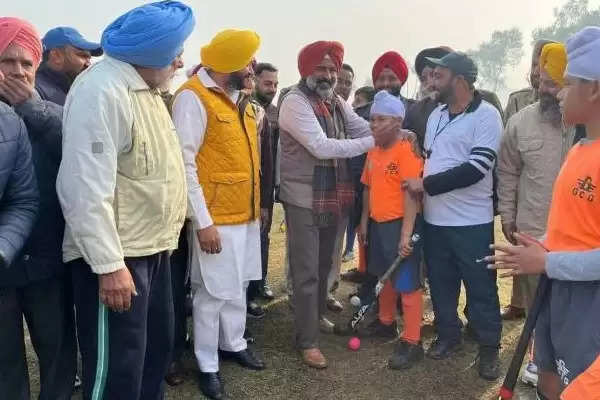 Employment News-Punjab Sports and Education Minister Pargat Singh has said that the Punjab Government has prepared a new sports model. Under this, the Punjab Government has approved 2000 new posts of physical education teachers to strengthen the sports infrastructure in schools up to the village level. Apart from this, an agreement has been signed with the South African Sports Federation to train physical education teachers according to international sports standards.

During a visit to the Hockey Academy running at Government Senior Secondary School in Tibba on Thursday, the Sports Minister said that the physical development of children up to the age of eight is the fastest. For this, special attention is being paid by the Education Department towards sports during primary education.

He said that a long-term plan has been made under the sports model. Because years of training is necessary for budding players to succeed in the sport's international matches. About two thousand crore rupees are needed for complete overhaul of the grassroots sports infrastructure of Punjab. For this, the Punjab government, sports federations and overseas Indians can make a big effort together. Pargat Singh also announced setting up of six a-side astrotrophs for Hockey Academy at Dune School by the Sports Department. Apart from this, orders have been given to start the process of approving the establishment of a 50 seater wig of the Sports Department in the school. Along with announcing the permanent appointment of a trainer in the Hockey Academy, it also approved the installation of complete Kabaddi mats in Channa Sher Singh village of Sultanpur light. Under this, a mat with 400 mattresses will be laid for Kabaddi players. Teach hockey tricks to children

The Sports and Education Minister said that 18-18 hours work is being done by the Punjab Government under the leadership of Chief Minister Charanjit Singh Channi. In this, special attention is being paid towards the development of education and sports. He also interacted with the children in the academy and taught them the tricks of hockey. Earlier, MLA from Sultanpur Lodhi Navtej Singh Cheema welcomed cabinet minister Pargat Singh on his arrival here. Said, all the schools in Sultanpur light are smart schools. He challenged the ministers of the Delhi government to compete the government smart schools of Sultanpur area with the schools of Delhi, then they would come to know the truth. On this occasion, MLA from Khadoor Sahib Ramanjit Singh Sikki, District Congress President Ramesh Dadwidi, Sultanpur Lodhi Nagar Council President Deepak Dhir, Chairman of City Improvement Trust Tejwant Singh, District Education Officer Gurdeep Singh, • District Education Officer Elementary, Deputy • District Education Officer Bikramjit Singh Thid, Principal Lakhveer Singh etc. were present.