Education system in Chandauli:  children study in the corridor 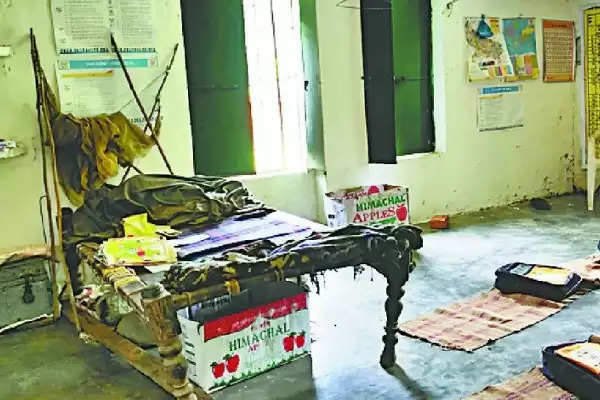 Employment News-If you want to see how the education system and mission rejuvenation is being made fun of, then you should come to the primary school and Watand located in Naugarh block of Chandauli district. There are two rooms here. Both have the headmaster, a teacher and his family permanently residing. There is no table-chair in the room but Guruji's bunk with bed. Where they sleep at night and teach during the day. Children are forced to study in the corner of the same room or in the corridor. Not only this, the headmaster has also started construction of a private residence in the school itself.

Under Mission Kayakalp, the government is spending crores of rupees for the improvement of schools and facilities, but the education system in the backward block Naugarh is in bad shape. Amar Ujala has published the news of tabela, rearing of goats, keeping of straw and capture in many schools here in the past. In the same sequence, in the investigation of Amar Ujala, a school was seen on Thursday, which surprised. Yes, Guruji's cot was found in place of table and chair in the primary school and Watand of Naugarh block. It also had beds and mosquito nets on it.
It is not certain where the children will study. Sometimes in the corridor and sometimes in the corner of the room, the children are taught the name. The primary school has two rooms, an office and a corridor. The headmaster, a teacher and his family have been living in both the rooms for a long time. Household items were scattered in the room. When Amar Ujala's team reached the school at 11.30 am, the students were found roaming outside. The school floor was broken. The color of the walls was gone. Private residence is being built by the headmaster on the land of the school itself, inside the boundary wall of the primary school and Watand. Villagers told that Guruji now wants to live in this.
This is a very serious matter. Action will be taken on this. Soon the school will be de-occupied and the building being built in the school will be demolished. - Awadhesh Narayan Singh, ABSA