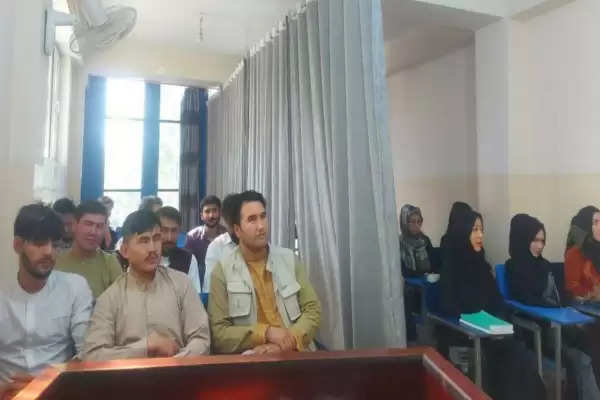 Employment News-Since the Taliban took control of Afghanistan, new decrees are being issued every day regarding the restrictions on girls. Sometimes they are stopped from playing, sometimes the working women are ordered to stay at home. Now the Taliban is also going to make strict laws regarding the education of girls.

Curtains will be put up in classrooms to prevent boys and girls from meeting each other in Afghan universities under Taliban rule. According to the new proposal, along with putting up curtains, classes will be held in different shifts for youth and girls.

There are about 40 public universities in Afghanistan. After the Taliban ordered a ban on co-education, the Ministry of Higher Education was asked to submit its plan to reopen state universities. For now, most universities have proposed allowing girls to attend classes behind the scenes or cubicles, or transfer them to institutions in the provinces from which they come.

Takhar University Chancellor Khairuddin Khairkha said that we plan to organize separate classes for boys and girls. This will be applicable where there are more than 15 girls in a class. To do this we are planning to start classes in shifts. If there are less than 15 girls, we will put up dividers, as used in hospitals.

The Chancellor of Kandahar University said the issue has been considered in the academic council of the institute, following which a plan was sent to the government. It also includes a request to allow girls to be transferred to institutions in their provinces.

He said- “We have made this proposal because some of our girl students have expressed interest in getting transferred, but for those who want to continue classes in Kandahar University, we will create a corner inside the classroom which is separated by a curtain. Be".

Like Takhar University, for classes with women over 15, Kandahar University has also proposed to call students in shifts – in the morning for girls and in the afternoon for men.

However, there is a problem with these proposals as well. Institutions already facing financial crunch will be burdened further after the passage of this proposal. Some of these institutions have not been able to pay teachers salaries since the arrival of the Taliban. For now, Kandahar University has sought about $6,200 from the government, Takhar University $19,000 and Helmand $12,000 for these arrangements.

Undergraduate education in public universities in Afghanistan is free. No fee is charged from the students. Free food and accommodation are also provided to those staying in the hostels.

A Kabul University source said the Taliban in response to the proposal reiterated the need for strict enforcement of gender discrimination. It has also asked the university to consider relocating female students to their local provinces. But Kabul University has its own separate course. Hence it is not possible to take the students to other institutions. At the same time, the Taliban says that there should be only women teachers for women, which is also not possible because the number of women teachers is very less.

However, the vice-chancellors of Kandahar and Helmand University said there was no restriction on male teachers teaching women. Helmand University chancellor Abdul Rahman said holding classes in two separate shifts for men and women doesn't work for a university like ours. Because we have 235 women and more than 2,000 men. We cannot get all male students in one shift with only 23 classes. We have 107 teachers, all male. Finding classes is the first challenge and finding enough professors is the second problem for our university.