India's largest Muslim students' body -- the Muslim Students' Organistion of India (MSO) -- is holding its national convention on the theme 'Nation Building and Islam' at the Ghalib Academy in Delhi.
By Jitendra Jangid Mon, 21 Nov 2022 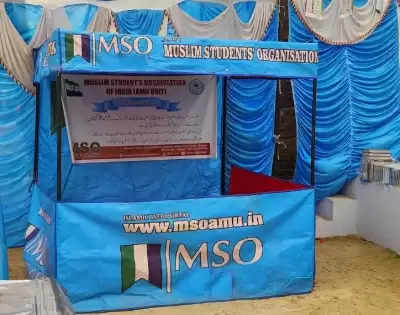 New Delhi, Nov 21 India's largest Muslim students' body -- the Muslim Students' Organistion of India (MSO) -- is holding its national convention on the theme 'Nation Building and Islam' at the Ghalib Academy in Delhi.

Several programmes were organised on the first day of the two-day event, during which several important resolutions were also passed.

"The Muslim youth of India have made significant contributions to nation building and these need to be expanded. At the national convention of MSO, the issue was discussed in detail as to how Muslim youth pursuing higher education in the country can be coaxed towards making a larger contributions towards nation building," the MSO said in a statement issued on Saturday.

"There are thousands of students currently enrolled in PhD courses across the country in different disciplines, with many Muslim youth being members of the MSO. The organisation is happy that MSOs have an important role to play in the growth of research that is very effective for the country," it added.

The MSO also expressed its concern about the spread of bigotry among Indian Muslim youth and said that they are also working to address the issue.

The organisation considers its responsibility to prevent the rise of radicalisation in order to maintain national security, it said.

During the convention, the MSO also discussed the employment status, education and mainstreaming of the youth in Kashmir.

"The organisation believes that the situation of the youth in Kashmir has become very complicated, and to fix this the MSO is ready to provide its services," it stated.

MSO Chairman Shujaat Quadri said that a delegation has been appointed to conduct a career guidance camp for the youth in Kashmir.

The MSO also demanded the setting up of a 'Council for promotion of Sufism and Kashmiriyat' in Srinagar for which the organisation is ready to provide the blueprint.