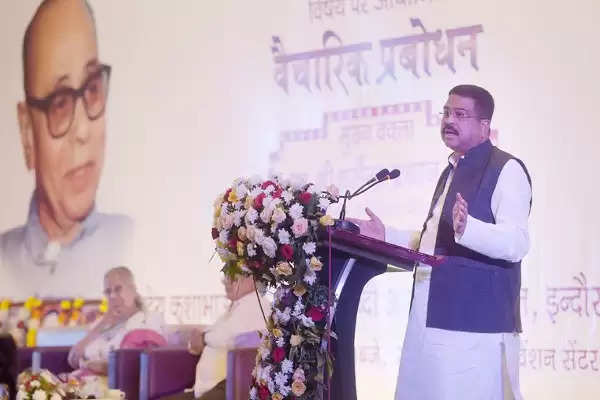 Employment News-Today education has become degree based. Education has become for the job. This topic has to be understood. Through the National Education Policy, we will go out of the slavery mentality and the system made by the British. We will not go after employment. We are not able to integrate the skills of the people with the education system. Young people are running after jobs. The National Education Policy will change all these things. Our youth will not be job makers but job givers. We have to connect education with the work of the people.

This is to say of the Union Minister for Education, Skill Development and Entrepreneurship Dharmendra Pradhan. Under Kushabhau Thackeray's birth centenary year, a lecture was held on the topic of new education policy in building a capable and prosperous India at a convention center located on the bypass on Wednesday. Central Education participated in this and expressed their views on the subject. He said that out of 130 crore population in India, there are 25 crore youth in the age group of 15 to 25 years. India is a country of youth. 11 crore jawans out of 25 are pursuing ITI, 11th, 12th, diploma, engineering colleges or graduate courses. The remaining 14 crore youth are associated with some work.

The Union Minister said that languages ​​have been given special importance in the National Education Policy. All languages ​​of India are important. Everyone's sentiment is the same. We treat all languages ​​as national languages ​​with great respect. Hindi is our official language. It is important but Marathi, Gujarati, Telugu, Kannada, Bengali or any other language is all melodious. It holds them all together. Japan and Germany are the biggest powers in the world. Both the countries do not know English. Both are at the forefront of innovation, technology, financial management and more. While we remained under the illusion of English. There is no attachment to English, but it is not necessary to know English to move forward.

Those who want to go on a global scale. Those who want to do research work should be taught in English but those who want to work in the country should be taught in Hindi. With this they can pass on the benefit to others as well. Responding to the questions of the journalists, the Union Minister said that when the condition of many countries at the global level was weak in Corona, India's GDP had improved at that time, but the fight between Russia and Ukraine affected us too. He said that the students who have returned to India from Ukraine will not be allowed to lose their studies. Soon it will be resolved.

BJP national general secretary Kailash Vijayvargiya, who attended the program, said that the decision of the High Court regarding loudspeakers should be followed by all the state governments. According to the directions of the court, the government should follow the law and order. However, wherever people have objections to loudspeakers, they should be banned. He took a jibe at the Thackeray family of Maharashtra and said that he is no longer Uddhav Thackeray but Uddhav Panwar. MP Shankar Lalwani said that the startup policy will be started soon. For this, a big program will be organized in the city. Along with this, Indore will also get some more gifts. Former Lok Sabha Speaker Sumitra Mahajan, State Higher Education Minister Mohan Yadav, Minister Tulsi Silavat and many city educationists, social workers and BJP leaders were present in the program.