Children are not getting mid day meal, teachers demonstrated 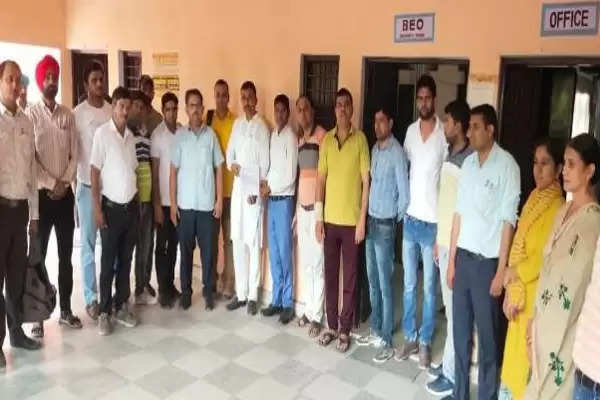 Employment News-Haryana School Teachers Association staged a sit-in at the Block Education Officer's office over many other problems including non-availability of books in schools, imposition of 200 to 500 rupees monthly and 1000 rupees admission fee on poor parents in Government Culture Model Schools. During this, by handing over a memorandum to the Block Education Officer, demanding solution of the problems.

Section Secretary Kapil said that while on one hand the government is promoting and spreading vigorously to provide affordable and accessible education to the people, the Right to Education Act 2009 is being violated openly. It is not logical to forcefully impose 200 to 500 rupees monthly and 1000 rupees admission fee on poor parents in Government Culture Model Schools. Apart from this, even after a month, the books did not reach the schools. Despite setting up of schools with full numbers, mid-day meals are not being given to the children of classes I to VIII till now due to non-availability of ration and cooking cost for mid-day meal. Regarding these demands, on Friday, the teachers of Haryana School Teachers Association's Block Mustafabad, under the chairmanship of Block Head Kuldeep Siwach, staged a sit-in at the Block Education Officer's office, Mustafabad. District Secretary Dinesh Tanwar said that in the conversation held on April 20, it was said that admission in government schools without SLC was made.

But a letter is issued that the government itself will bear the fees for the poor students of government schools to study in private schools. So that more and more students leave government schools and take admission in private schools. So that there is no need to fill 40 thousand vacant posts of teachers. Rajesh Kadyan, Neeraj, Amit Kharb, Ajay Malik, Rajkumar, Anil Dahiya, Seema Tanwar, Mahavir Sharma, Vinod, Anju, Manjubala, Rakesh and others were present on the occasion.