Amid crisis in Joshimath, board students will have option to pick exam centre of choice

Amid the land subsidence crisis in Joshimath, the Uttarakhand government has decided to allow the affected students appearing for board exams to pick the examination centre of their choice.
By Jitendra Jangid Wed, 18 Jan 2023 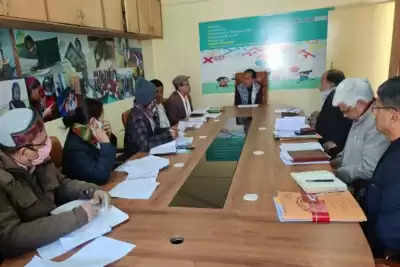 Dehradun, Jan 18-Amid the land subsidence crisis in Joshimath, the Uttarakhand government has decided to allow the affected students appearing for board exams to pick the examination centre of their choice.

Instruction in this regard has been given to the concerned officials, and the students will soon be asked for the exam centre of their choice.

After returning from Joshimath on Tuesday, Uttarakhand Education Minister Dhan Singh Rawat chaired a department meeting at the Directorate General of Education and gave instructions to the concerned officials to provide exemption to the affected students living in relief camps to choose the examination centre of their choice for the ensuing board exams, to be held from March 17 to Apr 6.

"To make sure that the affected students do not face any problem in appearing for the board exams, it has been decided to provide them option to choose the examination centre in any city as per their convenience. For this, the officials of the district administration and the education department have been asked to prepare a list and provide the details of the affected students to the concerned board officials soon," the minister said.

Rawat also informed that most of the students in disaster affected areas are studying in schools under Uttarakhand board and CBSE board. In this regard, the regional officer of the CBSE and the secretary of the Uttarakhand board have been directed to allot examination centres to the affected students as per their convenience.

In a bid to boost the morale of the students, the state government will also hold a 'Pariksha Pe Charcha' programme on January 27 with Prime Minister Narendra Modi for the board students across all schools in the state.

The government will also hold a painting competition across schools from January 20-23 based on the book 'Exam Warriors' by PM Modi, and the guidelines have been sent to the concerned officials for making the necessary preparations.