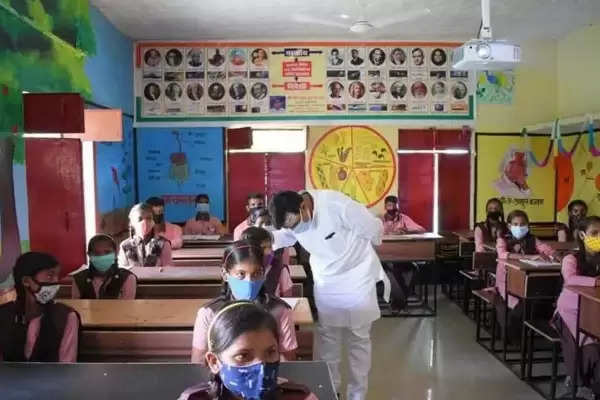 Employment News-More than 25 thousand children studying in 124 council schools of Sewapuri block of Varanasi went completely digital on Friday. Minister of State for Basic Education Dr. Satish Chandra Dwivedi inaugurated smart classes in various schools of the block on Friday. After this the children studied by watching videos through projectors. During this the children were looking happy. Apart from this, he reviewed the works of rejuvenation in the circle review meeting held at Circuit House. During this, instructions were given to complete all the works related to rejuvenation in the schools.

Sitting in the smart class, he asked some questions to the children, to which the children answered correctly. He appreciated the efforts of village head representative Santosh and school president Omprakash. The Basic Education Minister reached Sihorwan, the primary school of Arajiline. Where he inspected the teaching activities of the school and the facilities of the school. During this, BEO Ramakant Patel was present with him.

Children's spot response won hearts
While inspecting the primary school Moongwar, class three student Ritika told the names of all the districts and divisions of Uttar Pradesh at one go. Student Anuj told the names of states and planets. Pleased with the present response of the children, the minister rewarded both the children. During this AD Basic Awadh Kishore Singh, BSA Rakesh Singh, Pankaj Kumar, Omkar Mishra, Santosh Dubey, Kamlesh Verma, Arvind were present.
Becoming a police officer will protect the society
Kachhawan Road. During the inauguration of the Smart Class of Pre-Secondary School Thathra, when the minister asked the student Kajal what she would become by studying, she told that she wants to protect the society by becoming a police officer. During this, the cook of the school demanded to increase the honorarium. On this, the minister assured to place the proposal in front of the Chief Minister.

Villagers demanded to build an inter college
During the inspection, on the demand of the villagers, the minister reached the Government High School in Kachhawan. Here the villagers, in view of the arrangement of the school, demanded to do it till Inter. During this, Chandrabali Patel, the headmaster of the former secondary school Thathra, presented a memento to Dr. Satish Dwivedi. During this, BEO Ramashankar Singh, village head Sunil Bind, Umashankar Verma, Sunita, Sharda Devi, Veena Gaur, Aarti Devi, Smita Singh were present.

The cook complained about being fired from work
Sushila Devi and Devi of the school complained to the Minister of State for Basic Education Dr. Satish Chandra Dwivedi, who reached Bhatauli Composite School, Dehli Vinayak, by giving a leaflet on removal from the kitchen post. Alleged that the honorarium was not even received. The minister ordered an inquiry into it.